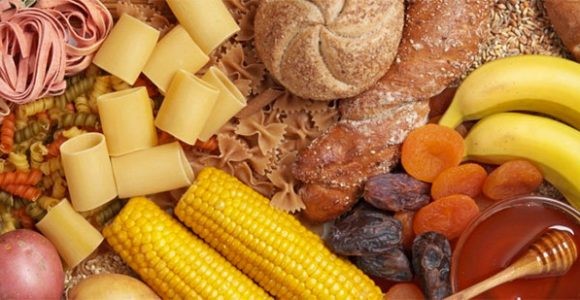 “The five-alarm fire bell of a tooth ache is difficult to ignore,” says Dr. Philippe P. Hujoel, professor of dental public health sciences at the University of Washington (UW) School of Dentistry in Seattle. Beyond the immediate distress, dental pain may portend future medical problems. It may be a warning that the high-glycemic diet that led to dental problems in the short term may, in the long term, lead to potentially serious chronic diseases.

Hujoel reviewed the relationships between diet, dental disease, and chronic systemic illness in a report published July 1 in the Journal of Dental Research. He weighed two contradictory viewpoints on the role of dietary carbohydrates in health and disease. The debate surrounds fermentable carbohydates: foods that turn into simple sugars in the mouth. Fermentable carbohydrates are not just sweets like cookies, doughnuts, cake and candy. They also include bananas and several tropical fruits, sticky fruits like raisins and other dried fruits, and starchy foods like potatoes, refined wheat flour, yams, rice, pasta, pretzels, bread, and corn.

The differing perspectives on the perceived role of dietary carbohydrates have resulted in opposing approaches to dental disease prevention, Hujoel notes, and have prompted debates in interpreting the link between dental diseases and such systemic diseases as obesity, diabetes, and some forms of cancer.

Over the past twenty years or so, Hujoel says, people have been advised to make fermentable dietary carbohydrates the foundation of their diet. Fats were considered the evil food. A high-carbohydrate diet was assumed to prevent a number of systemic chronic diseases. Unfortunately, such a diet – allegedly good for systemic health – was bad for dental health. As a result, cavities or gingival bleeding from fermentable carbohydrates could be avoided only – and not always successfully, as Hujoel points out — by conscientious brushing, fluorides, and other types of dental preventive measures. When these measures are not successful, people end up with cavities and gum disease.

But what if fermentable carbohydrates are also bad for systemic health? Hujoel asks. What if dietary guidelines would start incorporating the slew of clinical trial results suggesting that a diet low in fermentable carbohydrates improves cardiovascular markers of disease and decreases body fat? Such a change in perspective on fermentable carbohydrates, and by extension, on people’s diets, could have a significant impact on the dental profession, as a diet higher in fat and protein does not cause dental diseases, he notes. Dentists would no longer be pressed to recommend to patients diets that are bad for teeth or remain mum when it comes to dietary advice. Dentists often have been reluctant, Hujoel says, to challenge the prevailing thinking on nutrition. Advising patients to reduce the amount or frequency of fermentable carbohydrate consumption is difficult when official guidelines suggested the opposite.

The close correlation between the biological mechanisms that cause dental decay and the factors responsible for high average levels of glucose in the blood is intriguing. Hujoel explains that eating sugar or fermentable carbohydrates drops the acidity levels of dental plaque and is considered an initiating cause of dental decay.

“Eating these same foods, he says, is also associated with spikes in blood sugar levels. There is fascinating evidence that suggests that the higher the glycemic level of a food, the more it will drop the acidity of dental plaque, and the higher it will raise blood sugar. So, possibly, dental decay may really be a marker for the chronic high-glycemic diets that lead to both dental decay and chronic systemic diseases. This puts a whole new light on studies that have linked dental diseases to such diverse illnesses as Alzheimer’s disease and pancreatic cancer.”

The correlations between dental diseases and systemic disease, he adds, provide indirect support for those researchers who have suggested that Alzheimer’s disease and pancreatic cancer are due to an abnormal blood glucose metabolism.

The hypotheses on dental diseases as a marker for the diseases of civilization were postulated back in the mid-20th century by two physicians: Thomas Cleave and John Yudkin. Tragically, their work, although supported by epidemiological evidence, became largely forgotten, Hujoel notes. This is unfortunate, he adds, because dental diseases really may be the most noticeable and rapid warning sign to an individual that something is going awry with his or her diet.

“Dental problems from poor dietary habits appear in a few weeks to a few years,” Hujoel explains. “Dental improvement can be rapid when habits are corrected. For example, reducing sugar intake can often improve gingivitis scores (a measurement of gum disease) in a couple of weeks. Dental disease reveals very early on that eating habits are putting a person at risk for systemic disease. Because chronic medical disease takes decades to become severe enough to be detected in screening tests, dental diseases may provide plenty of lead-time to change harmful eating habits and thereby decrease the risk of developing the other diseases of civilization.”

@dental_test - March 28, 2018
0
Periodontists deal with the surrounding and supporting structures of the teeth, most notably the gums.  It requires 2-3 additional years of training following dental...

Dental Dos and Don’ts During Pregnancy

Braces: Not Just for Children and Teens

Losing a Tooth Is More Disastrous Than You Think

Disclaimer: The information on this site is for educational purposes only, and should not replace the counsel provided by a dental professional. Please consult your dentist or doctor in the event of a dental concern. This site does not provide medical advice © Copyright 2018 Dental Web DMD. All rights reserved.
Contact us: admin@dentalwebdmd.com
Site by Easy Street Marketing
Font Resize
Accessibility by WAH
MORE STORIES