Scaling – scraping of the tooth above the gums to remove calculus and soft debris.  Scaling is often provided alongside root planing as part of a periodontal treatment.

Sealants – dental sealants are a preventive treatment involving the application of a clear resin over the biting surfaces of the teeth to protect against decay. 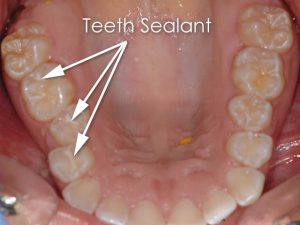 Sedation Dentistry – dentistry that uses medication to help patients feel relaxed and calm during their treatment. Also known as “sleep dentistry,” there are several forms of both conscious and unconscious sedations available.

Single Film – an X-ray that shows an entire, single tooth.

Sloughing – a condition in which the gingival tissue deadens and peels away from the living tissue.

Socket – a cavity in the bone.  See Alveolus.

Soft Palate – the back third of the roof of the mouth composed of soft tissue.

Space Maintainer – a dental appliance used to maintain space for the permanent teeth to grow into position in the mouth.  Space maintainers are often used when teeth are lost or need to be extracted prematurely.

Stain, Extrinsic – a stain located on the outside of the tooth surface, and originating from substances such as tobacco, coffee, tea, or food.  This type of stain may be removed by polishing, or by a whitening treatment.

Stain, Intrinsic – a stain originating from the ingestion of certain material or chemical substances during tooth development, or from the presence of caries (tooth decay).  This stain is permanent, and is located inside the tooth, and thus cannot be removed.

Stomatitis (Cancer Sores) – a common name for inflammatory diseases of the oral mucosa.  Most stomatitis manifests in the form of painful erosions and ulcers in the mouth.

Submucosa – the layer of tissue under the gums or the mucous membrane.

Succedaneous – a tooth that replaces or succeeds another.

Supergingival – the area above the gingival margin, or above the gums on the tooth.

Supernumerary Teeth – extra teeth which develop in addition to the normal 32 adult teeth.

Surgical Template – a clear tray used in the placement of dental implants.

How Does Aging Affect Your Oral Health?

How Modern Dental Veneers Can Help Your Smile

Caring for Your Oral Health While You Are Pregnant

Dental Implants Are a Boon for Baby Boomers

Disclaimer: The information on this site is for educational purposes only, and should not replace the counsel provided by a dental professional. Please consult your dentist or doctor in the event of a dental concern. This site does not provide medical advice © Copyright 2018 Dental Web DMD. All rights reserved.
Contact us: admin@dentalwebdmd.com
Site by Easy Street Marketing
Font Resize